MAKHANAVU TO SHAKE OFF RING RUST AGAINST HADEBE 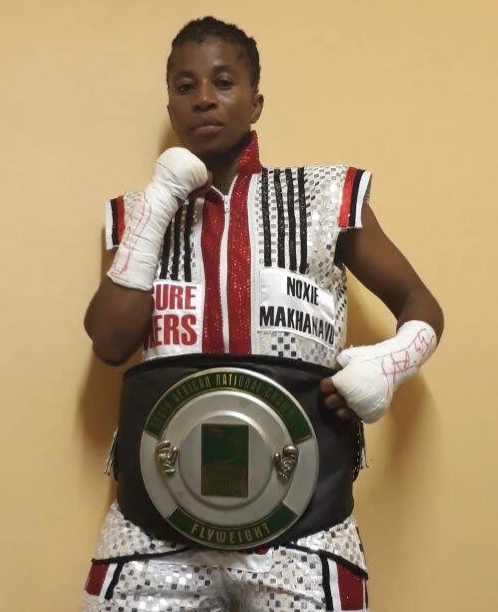 Noxolo Makhanavu was ready to throw the towel and quit boxing because she was ‘fed up’ with the sport, but a call from TLB Boxing Promotions forced her to change her mind. The call was offering Makhanavu an opportunity to fight again. And after accepting to fight against Simangele Hadebe, Makhanavu started working very hard at the gym. She has had some tough sparring sessions with male boxers ahead of her South African female flyweight title defence against Hadebe at the Graceland Casino in Secunda, Mpumalanga, on Saturday, 20 March. Being the only female boxer at her gym forced Makhanavu to spar against male boxers like Ayanda Ndulani, who is her stablemate.
Her fight against Hadebe is the on the undercard of the TLB Boxing Promotions’ tournament, which is headlined by an international 10 rounds bout between five-time world champion Hector “Hekkie” Budler and Muhsin Kizota from Tanzania.
“I’ve been itching for a fight, but had been unfortunate because my fights got postponed a number of times. I had already given up on boxing and was going to hang up my gloves when I received a call offering me this fight. I’m grateful to TLB Promotions for giving me this opportunity,” Makhanavu said.

The 35-year-old East London boxer has, in her own words, admitted that Hadebe is a closed book to her. This is so even though Makhanavu watched her opponent when she fought against Siphosethu Nxazonke in 2019.
“I don’t know much about Simangele. I only watched her when she fought against Nxazonke. I watched the two rounds against Nxazonke and saw what kind of a fighter she is,” Makhanavu said.
“I have been sparring with Ayanda and the other boxers. It’s difficult to spar with male boxers because they hit hard and they don’t even consider the fact that I’m a woman.”
KwaThema-born Hadebe, meanwhile, also admitted that she knows nothing about Makhanavu.
“We were actually supposed to fight a year ago under a different promoter before the lockdown. Thanks so much to TLB for making it happen. This proves that they really do want to see us fighting,”Hadebe said. “To be honest, I don’t know her at all. I have never seen her in a fight. It’s my first time fighting in a flyweight division. Previously, I was fighting as a bantamweight. First and second rounds will be enough for me to figure her out.”
Hadebe plans to conquer South Africa and then see what the world has to offer. The Gauteng boxer is also happy that no one between her and Makhanavu is going to enjoy home ground advantage as this fight is going to be held in a neutral province.
“I want to take the SA title and aim higher. I aim to fight opponents outside because that’s where I will be building my brand. My opponent comes from the Eastern Cape and I come from Gauteng. This is 50-50,” Hadebe said.