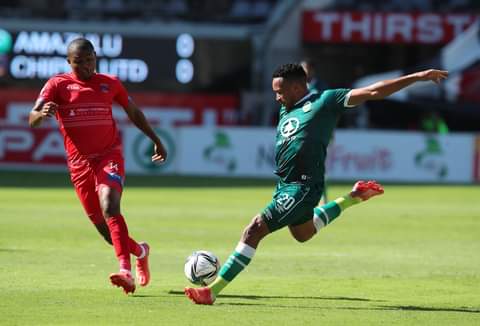 Chippa United caretaker coach Kurt Lentjies was left disappointed after his boys squandered a 2-0 lead to draw 2-2 with AmaZulu at King’s Park in Durban on Tuesday.

Big striker Eva Nga Bienvenu scored twice in the 22nd and 28th minutes to give the Chilli Boys a 2-0 lead before the half hour mark.

But they let themselves down allowing Usuthu to come back to the game through substitute Luvuyo Memela’s brace.

“Ja, we’re disappointed once the final whistle blew with 2-2. If you score two goals away from home you expect to defend it. This is a bitter pill to swallow,” Lentjies said.

The former Chilli Boys and Maritzburg United midfielder thought his boys would add more goals in the second half. However, it was never to be as they leaked two goals instead of adding a goal or two.

“I thought obviously we would add more goals in the second half. I told the guys at half time to keep it up. At 2-0 they scored, they got back to the game,” Lentjies said.

The Chilli Boys now face the Team of Choice away at the Harry Gwala Stadium on Sunday evening.