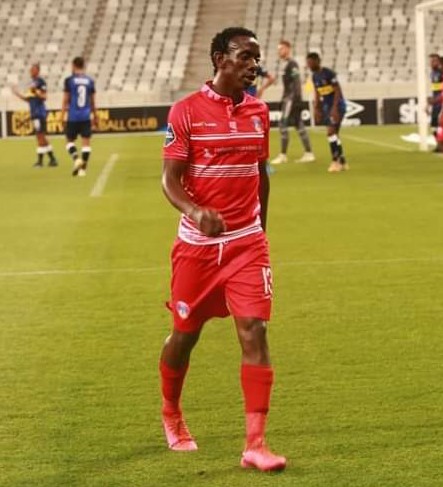 Chippa United midfielder Maloisane Mokhele is satisfied with his progress at the Chilli Boys.
Mokhele has played in 12 games – seven starts and five appearances from the bench –  and scored two goals with five assists.
He was one of the scorers when the Chilli Boys trounced Black Leopards 3-0 in Thohoyandou last Saturday.
And Mokhele expects to dish out yet another fine performance when the Chilli Boys clash against Bloemfontein Celtic in a DStv Premiership match at the Dr Petrus Molemela Stadium in Mangaung on Wednesday (17h00).
Coach Daniel ‘Dance’ Malesela’s Chilli Boys go to the Celtic match after they collected seven points in their last three games.
“Things are getting better day by day. I’m still learning because I’m still missing chances when we are playing. But I’m happy about my  performance,” Mokhele said.
“I’m going to the Celtic match to make sure that we get maximum points. I respect Celtic a lot. Our coach believes in us and he trusts us. We have our plans and targets.”
The Chilli Boys have been on the road playing away matches since the beginning of January following COVID-19 scare in Port Elizabeth.
“For some of us it’s difficult to play these away games. But the coach has told us that it’s all in the mind, there is nothing to worry about.”