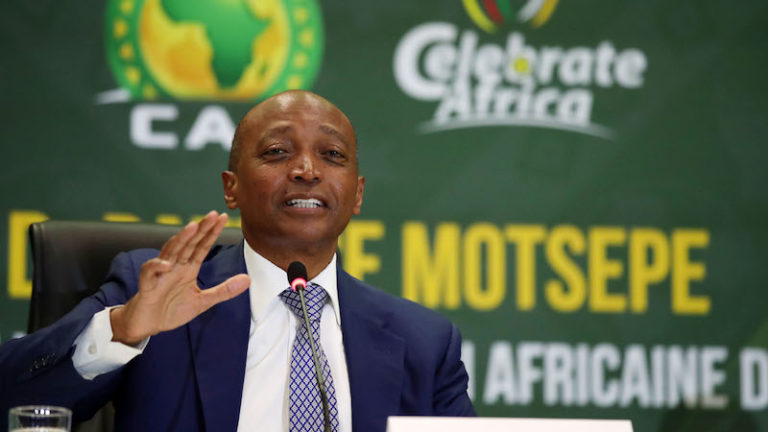 Confederation of African Football (CAF) president Patrice Motsepe has outlined his plans to grow and develop the continent’s football in his four-year term as the CAF top dog.
The South African billionaire addressed the media in Johannesburg on Tuesday in the presence of Minister of Sport and Recreation Nathi Mthethwa, president of the Council of South African Football Associations (COSAFA) Phillip Chiyagwa from Zimbabwe, Premier Soccer League (PSL) chairman Irvin Khoza and president of the South African Football Association (SAFA) Danny Jordaan.
Motsepe has begun his four-year term as CAF president following his installation into the top post in African football at the CAF 43rd General Assembly held in Rabat, Morocco, on Friday last week. He was the sole candidate after Ivorian Jacques Anouma, Augustin Senghor from Senegal and Ahmed Yahya from Mauritania withdrew from the race a week before the elections.
Adding more money to CAF’s coffers tops the list of the former Mamelodi Sundowns Motsepe president’s priorities in his quest to change the face of African football.
“This period of leadership will be judged not by my election manifesto, but by action. I’m not going to be president of an organisation that four years from now has not made practical and tangible progress. It is not going to happen. I’m absolutely confident that over the next few years African football will improve, become globally competitive and self-sustaining,” Motsepe said.
“Over the next nine to 12 months, I will be visiting every single one of the African nations. I will also have two more meetings this year with all the presidents and we will talk about the urgent steps we need to take to improve the game on the continent. At World Cup level, we have to succeed and be respected. The only thing that brings respect is results.”
The 59-year-old Motsepe is also looking at sourcing finances for all CAF member associations as well as increasing sponsorship for both the Africa Cup of Nations and the CAF Champions League.
Meanwhile, Motsepe has revealed that no changes will be effected in as far as the Africa Cup of Nations tournament is concerned and it’s going to continue being a biennial competition. He admitted, though, that different views were put forward regarding the tournament.