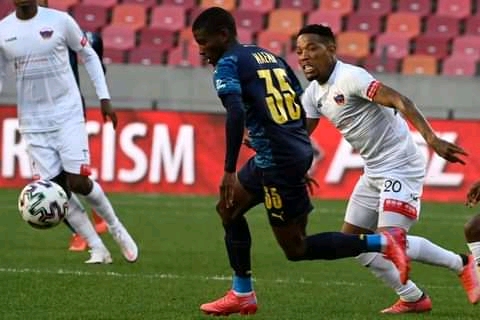 Chippa United and Mamelodi Sundowns played to a goalless draw in a DStv Premiership encounter at the Nelson Mandela Bay Stadium in Gqeberha on Tuesday evening.
The Brazilians had an upper hand throughout the match, but they found the Chilli Boys tough to break.
Both clubs were forced to make changes after Chilli Boys’ Sammy Seabi and Khuliso Mudau of Sundowns left the field injured. Seabi’s place was taken by Siphesihle Mkhize while Thapelo Morena came in for Mudau.
The Chilli Boys now have four points after they won 1-0 over Sekhukhune United in their opening match last Saturday. The Brazilians also have four points having beaten AmaZulu 1-0 last Friday.
Meanwhile, Marumo Gallants and Orlando Pirates drew goalless at the Peter Mokaba Stadium in Polokwane.