HUNT WORKS ON MENTALITY OF HIS PLAYERS 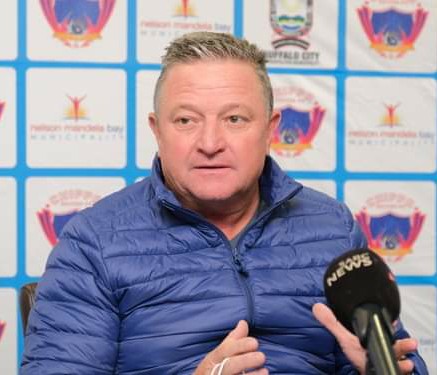 Gavin Hunt is going to use a different approach when his team Chippa United meet Orlando Pirates in a DStv Premiership match at the Nelson Mandela Bay Stadium in Gqeberha on Saturday (15h00).
The two teams go into this match having had contrasting fortunes last weekend. The Chilli Boys lost 1-0 to Royal AM in Durban on Saturday while the Buccaneers defeated their neighbours Swallows FC by the same scoreline in Orlando East.
“Every game gives you different scenarios. We will try to do the same again. The mentality is the most important thing we need to work on,” the Chilli Boys coach said.
The Chilli Boys returned to Gqeberha on Monday after playing Royal AM on Saturday.
“Obviously, we had a shorter week. We couldn’t get back from Durban, only got back on Monday because there’s only one flight,” Hunt revealed.
The former Kaizer Chiefs and Bidvest Wits mentor still believes that the Chilli Boys should have walked away with something from the Royal AM match.
“We didn’t play too well, especially in the first half. Second half, we were really good. I thought the penalty decision was harsh. It was not a penalty, that’s football for you. Definitely, we deserved a point there,” he said.