FANS TO BE ALLOWED INTO BOXING VENUE 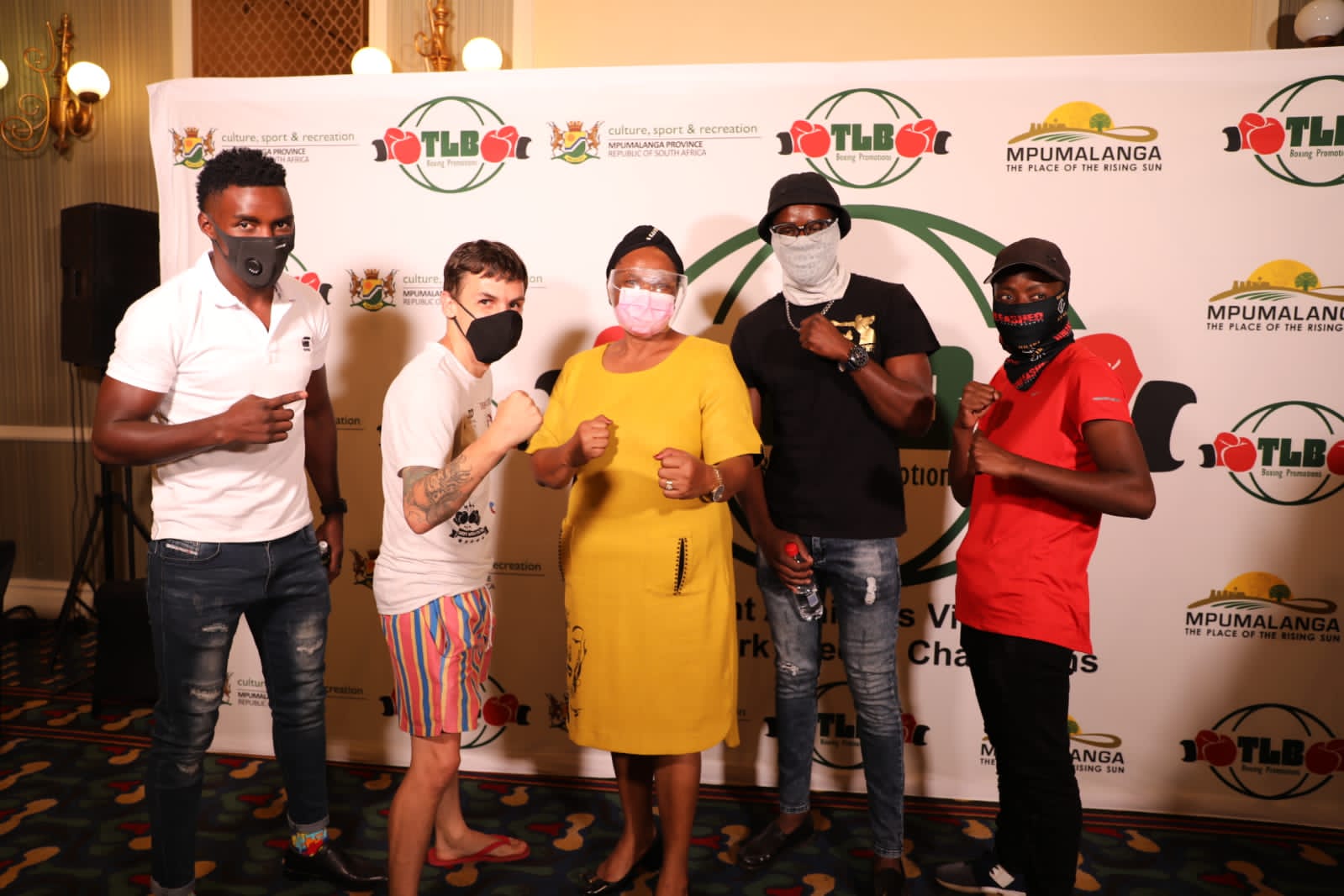 For the first time since March last year boxing fans are going to be allowed into the venue when TLB Boxing Promotions promotes an International Women’s Month and Human Rights month tournament at the Graceland Casino in Secunda, Mpumalanga, on Saturday, 20 March.

This was revealed by Mpumalanga MEC for Sport, Arts, Culture and Recreation Thandi Shongwe during the launch of the tournament at the Graceland Casino on Tuesday.

“As the Mpumalanga Province we are very much excited to host this boxing event. It’s good to promote social cohesion and also to boost the economy of the province, especially the local economy here in Govan Mbeki. And also just to make the people happy that they are welcome to grace the occasion, relax after a long time of lockdown. We are much excited that we will be going out to Graceland where we shall be watching the boxing,” Shongwe said.

“We started to engage in 2018 in terms of bringing boxing, in terms of working with TLB. We just want to see more events coming to Mpumalanga, especially with boxing. We are excited even this time because it also includes women who are going to be part of the programme.”

This tournament is going to see former world champion Hekkie ‘Hexecutioner’ Budler, making a comeback after more than two years. The five-time world champion has been inactive since his loss to Japanese boxer Hiroto Kyoguchi in December 2018. Budler is going to face Muhsin Kizota from Tanzania in a flyweight bout over 10 rounds.

“It’s been hard, it’s been a struggle. You need to fight, you need to make money. I’m rated highly at WBC and need to fight to keep my rating. This is a great opportunity and I’m grateful to TLB for giving me this opportunity,” Budler said.

“I have been a champion most of my professional career. Like I said I’m rated number two by the WBC. I’m hopeful when things get better I will get a shot. God willing I can win and keep on winning more bouts.”

Budler whose five fights were cancelled because of a number reasons in the past two years knows what to expect from Kizota after watching him fighting before.

“I’ve seen him fighting twice here in South Africa. He lost both times. He is a capable fighter, he is a good fighter. I believe every fight is a hard fight that’s why I train for 12 rounds,” said Budler.

This is going to be the the former IBO and World Boxing Federation (WBF) lightweight champion’s first fight since he returned to his former trainer Mzamo “Chief” Njekanye.

“I’m excited. I’m coming back from a very bad loss. It’s good to come back, I know I’m going to win. It was unfortunate that I lost my last fight. I’m grateful to be part of this tournament. I have seen short clips of him, he is not a difficult opponent. I need to be just mentally fit, go there and win the fight,” Ndongeni said.

This is going to be TLB Boxing Promotions’ third tournament since the world was hit by the COVID-19 pandemic and the promotional outfit’s boss Joyce Kungwane is happy with taking boxing to Mpumalanga.

“So as TLB we felt that Mpumalanga has been neglected, especially when it comes to boxing and we are pleased it’s finally happening. We started this journey in 2018, knocking at the doors of Mpumalanga Culture, Sport and Recreation saying to them that we want to bring boxing back to Mpumalanga and we are very much thankful it’s happening,” said Kungwane.

Kungwane has also revealed that one of their goals as a promotions company is to make sure that they take care of boxers, especially when they have lost their fights.

“We are trying to take care of our boxers. It’s so sad that after boxers have lost they get thrown into the dustbin and for us nobody belongs in a dustbin. If we get an opportunity we want to take them out of the dustbin and make them shine again,” Kungwane said.