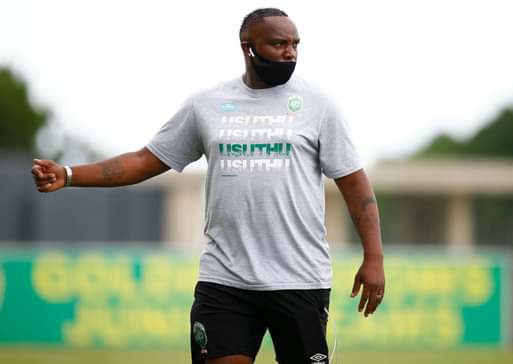 AmaZulu coach Benni McCarthy refuses to take credit for table-topping Usuthu’s excellent run this season.
Instead, the Usuthu mentor continues to give credit to his players who work their socks off in each an every match.
AmaZulu marched to the top of the DStv Premiership standings following a 1-0 win over their neighbours Lamontville Golden Arrows at the Sugar Ray Xulu Stadium in Clermont, Durban, on Saturday.
As a result of the win, Usuthu have clocked 50 points from 26 matches with only four games before they wrap up the season.
“We can’t be any more prouder. They have proven themselves,” McCarthy said referring to his hardworking players.
“To do what they have been doing is quite exceptional. It was a very tough game for us and the field didn’t help us because of the rain.
“First half, we were exceptional. The way we shifted, we used the width of the field. Second half we made a change and the momentum swung a little bit towards Arrows.”
Arrows coach Mandla Ncikazi, on the other hand, couldn’t hide his disappointment after the match.
“I’m disappointed with the result. I don’t think we had a good first half. We were not that bad. Both teams were still struggling on the pitch,” Ncikazi said.
“I think in the second half my players were there. I thought there was one team that appeared to play in the second half. We are still on course in what we planned at the beginning of the season.”