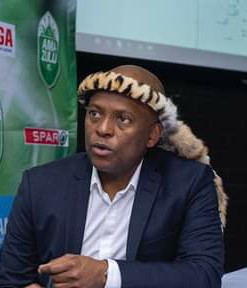 Premier Soccer League (PSL) chairman Irvin Khoza advised AmaZulu president Sandile Zungu to seek the blessings of the late King Goodwill Zwelithini kaBhekuzulu of the Zulu nation before taking over at Usuthu.
Zungu obliged and sought an audience with the late King, who gave him his blessings.
“Dr Khoza from the PSL asked me about whether I had called the late King regarding my decision. He advised me to do so in order to get the blessings from the King, who was happy with my decision. It’s good that we got the blessings,” Zungu said.
The Umlazi-born businessman’s decision to buy AmaZulu from previous owner Patrick Sokhela had to do with the rich history of the club.
“My love for football is just like that of any other person. The idea of owning a team came after I became an established businessman. In order to succeed I had to do something different. AmaZulu were that team because of their history and support base. It was all about our rebranding and repositioning  of the team,” Zungu said.
Immediately after buying Usuthu, Zungu declared that he wanted them to finish in the top four at the end of the season.
Currently, Usuthu are second on the DStv Premiership table with 50 points from 26 games with only four matches before they wrap up the season. Mamelodi Sundowns top the standings with 54 points from 25 matches.