KERR CREDITS EVERYBODY FOR TTM TRIUMPH 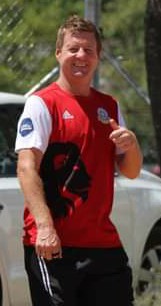 Triumphant Tshakhuma Tsha Madzivhandila coach Dylan Kerr has refused to take all the glory to himself after TTM annexed the Nedbank Cup following a 1-0 win over Chippa United in the final played at the Free State Stadium in Bloemfontein on Saturday evening.
The former Arcadia left wing reckons everyone at TTM deserves a pat on the back for a job well done.
“Credit to everybody. Credit to Vlad and his team. This is a cup final, you gotta dig deep. We made mistakes in the second half to give them a chance to attack. We defended like we should do. We defended like heroes. Credit to all my players,” Kerr said.
“At half time I said the only way we were gonna lose this game was if we were gonna give them too much respect. The first half we dominated. I’m so proud of everybody involved at Tshakhuma Tsha Madzivhandila.”
The former Black Leopards and Baroka FC mentor is grateful to Mpho Maleka and David ‘DVD’ Mathebula, who held the fort while he was busy fixing other stuff.
“Credit to my technical staff. Credit to Mpho Maleka and DVD. They have been fantastic while we have been together. We worked hard, we have just been rewarded. It’s a great achievement for TTM after the season they have had and the players have been through so many ups and downs,” Kerr remarked.
Meanwhile, Chilli Boys coach Vladislav Heric has congratulated Vhadau Vha Damani for winning the Nedbank Cup.
“Look, we tried to approach this game like any other game without pressure. Unfortunately, first half an hour we didn’t exist. We could not move. Last 15 minutes of the first half we started to recover. Second half we were like a different team. We looked more organised, much more better. We moved more. Congratulations to Dylan and his team,” Heric said.