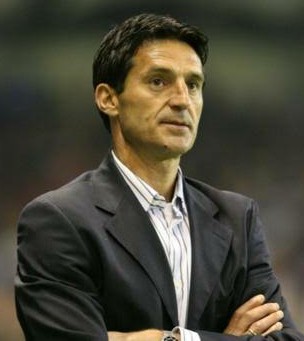 New Bafana Bafana coach Hugo Broos has appointed Cedomir Janesvki (pictured) as one of his assistants.

Janevski, who was born on 3 February 1961, played for both Yugoslavia and Macedonia. He now coaches Olympiakos Nicosia in Cyprus. He has Belgian citizenship and also played for Club Brugge in Belgium.
The 69-year-old Broos also revealed that Janevski won’t have language problems as he speaks English, French and Dutch.
“My Belgian assistant is not here at the moment because he is still working in Cyprus. He plays with his team a cup final and will come to South Africa,” Broos said.
“He is from Macedonia. He was a player before. He played in Brugge. He was married to a Belgian. There will be no problem with language. There will be no problem with experience.
“Nearly 20 years ago he won the cup in Brugge. He was the coach of the national team in Macedonia. He’s an experienced coach. I have to say he’s a friend of mine, working together will be 100 percent.”
Janevski is going to lead Olympiakos Nicosia against Anorthosis in the Cypriot Cup final on Saturday.
Meanwhile, Broos is yet to name his South African assistant whom he believes would be of great assistance to him.
“The South African coach will be the one who will be of great help to me on the first month because he knows African football. He knows the players, he knows the culture. He will help me a lot,” Broos said without revealing the name of his preferred local assistant.