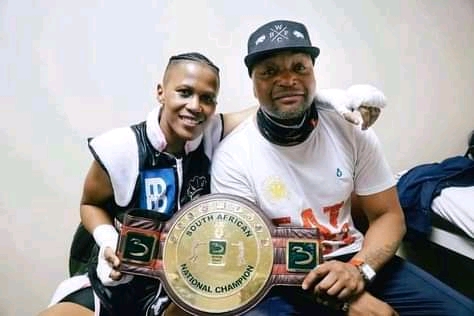 It’s easy to figure out why newly-crowned South African female bantamweight champion Sharadene Fortuin is a happy boxer.
Earlier this year, Fortuin was kicking her heels at her Seymour, Eastern Cape, home as life was becoming more difficult due to lack of fights.
However, things have changed now for the Eastern Cape lass after she dethroned Melissa Miller from Eldorado Park at the Booysens Boxing Gym in Johannesburg on Sunday.
“I’m very, very happy to have won this title,” the former world champion said.
“The fight went the way we expected it was going to be. I was fit and well prepared for Melissa.”
This was the first time Fortuin fought since winning against Thema Zuma in August 2018. And she has insisted that she didn’t feel like she had been away from the ring for three years.
“My performance didn’t show that I hadn’t fought in a long time before fighting against Melissa. She’s a good boxer. Our plan was to jab and move away from her and I did exactly that. I didn’t even feel her blows,” Fortuin said.
This was the second time Fortuin attempted to win the SA title. She failed at her first attempt as she lost on points to Bukiwe Nonina from Dutywa in September 2013.
Meanwhile, the former International Boxing Organisation (IBO) female bantamweight titlist is going to take a week-long break before returning to the gym.
“There’s a date in September, but I feel like it’s too soon. I want to rest. I want to be away from the gym for at least a week,” Fortuin, who is trained by Harry Ramogoadi-Manaka at his VIP Boxing Academy in Benoni, said.