ZINNBAUER RECKONS LIBYANS HAD NOTHING TO LOSE 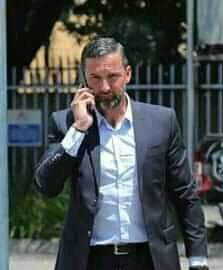 Orlando Pirates coach Josef Zinnbauer reckons that Libyan side Al Ahly Benghazi came to South Africa with nothing to lose.
The Buccaneers blew the Libyans away with a 3-0 scoreline in a CAF Confederation Cup Group A match at the Orlando Stadium in Soweto on Sunday evening.
Ntsikelelo Nyauza, Tshegofatso Mabasa and Kabelo Dlamini scored for the Soweto giants.
“They had in this game nothing to lose. In the first 10 minutes they made a lot of high pressure. In the second half it was good and we had more counter attacks. I think we it was a deserved win. We had a team effort and our target was three points from the first minute,” Zinnbauer said.
Meanwhile, German-born Zinnbauer is happy that former Bloemfontein Celtic striker Mabasa scored during the match.
“Mabasa scored, it’s important for him. He was a long time out. He is not 100 percent,” Zinnbauer said.
With two matches to go, the Buccaneers top Group A with eight points after registering two wins and two draws while the Libyans are third on four points following a win, a draw and two losses.