MOSIMANE NOT SURE WHAT TO EXPECT FROM CHIEFS 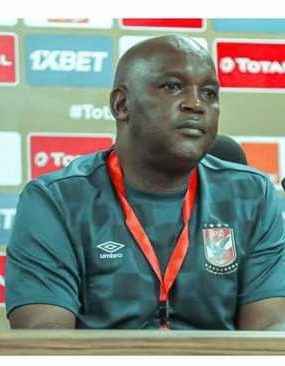 Al Ahly coach Pitso Mosimane has described Soweto giants Kaizer Chiefs as an enigma.
The former Mamelodi Sundowns coach is going to lead the Red Devils when they come up against Amakhosi in the CAF Champions League final at Stade Mohammed V in Casablanca, Morocco, on Saturday, 17 July.
The Egyptian giants set up a final against Chiefs following a 4-0 aggregate win over Esperance Sportive de Tunis from Tunisia in the semi-finals.
Amakhosi, on the other hand, beat Wydad Athletic Club from Morocco 1-0 on aggregate.
“Kaizer Chiefs are one of the biggest teams in South Africa. In terms of popularity, they are bigger than Sundowns. They have a bigger support base than Sundowns. Sundowns has been winning in the last 10 years,” Mosimane said.
“Good team, for me awkward. It’s an awkward team. You can’t describe. They finished number eight on the log, but they are in the Champions League final. It just shows that you have to pay attention to detail. They have not conceded a goal at their stadium. They beat Simba by four goals. We didn’t score four goals against Simba. You have to respect them. I don’t know what’s coming.”
Mosimane is chasing his third Champions League gold medal having won two – in 2016 with Sundowns and last year with Al Ahly.