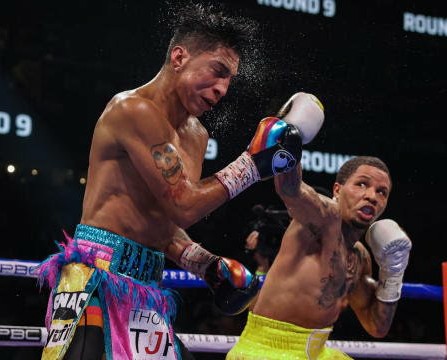 Unbeaten American boxer Gervonta ‘Tank’ Davis became a three-division world champion after he stopped his compatriot Mario Barrios in the 11th round at the State Farm Arena, Atlanta, Georgia in the United States on Saturday evening (Sunday morning South African time).
Fight referee Thomas Taylor stopped the proceedings following a series of blows from Davis resulting in the Baltimore-based boxer becoming the new World Boxing Association (WBA) junior-welterweight champion.
Prior to the stoppage, Davis had decked Barrios having first done so twice in the eighth round.
Davis, who had gone up two divisions, was ahead on all scorecards when he stopped Barrios.
The 26-year-old Davis has now won all his 25 fights with 24 of them via the short route while Barrios dropped to 26 wins (17 knockouts) and a loss.
Davis has had the WBA Super junior-lightweight and lightweight belts strapped around his waist.