MOSIMANE REVEALS WHAT HELPED HIM ADAPT TO LIFE IN EGYPT 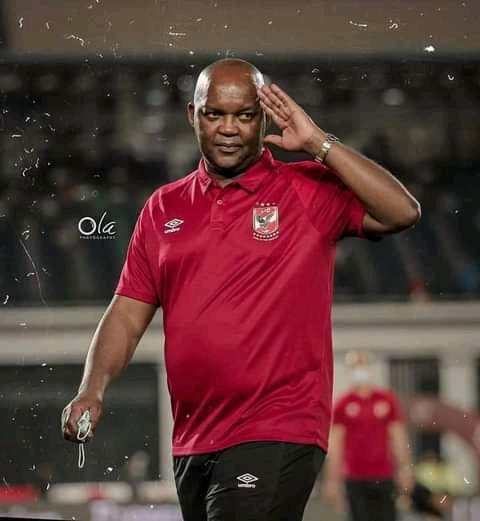 Pitso Mosimane knew before going to coach Egyptian giants Al Ahly that adapting to life in Egypt was the only way he was going to succeed in the North African country.
Speaking to SAfm’s Sport On show on Friday evening, the Al Ahly coach revealed that he adapted to Egyptian life like duck to water thus he managed to win four trophies in less than a year.
The former Mamelodi Sundowns coach has won the CAF Champions League trophy twice, the Egyptian Cup and the CAF Super Cup since joining the Red Devils in October last year.
“If you want to go to Rome, do what the Romans do. I don’t understand people coming to work in South Africa and not know how to greet in Zulu or Sotho in two years,” he said on SAfm.
“I had to adapt to the culture. I had to structure my training according to their religion. They pray five times a day here. If you want peace and harmony people must feel you help with their culture, 99 percent of my players don’t drink. Religion is controlled here. At Sundowns, I used to breathalyse everyday, here no breathalyser. You understand that I had to adapt, I had to learn the language.”
Meanwhile, Al Ahly are nine points behind log-leaders Zamalek on the Egyptian Premier League table and Mosimane is somehow not bothered.
“We are nine points behind Zamalek with three games in hand. If Zamalek win all the seven games left, we must win our 10 games. Football doesn’t work like that. We can’t say we will win all our games or Zamalek will win all their games. You can never know. Head to head we will win the title in case points are the same. It’s in our hands,” the former Bafana Bafana coach said.