END OF THE ROAD FOR NOTOANE’S BOYS 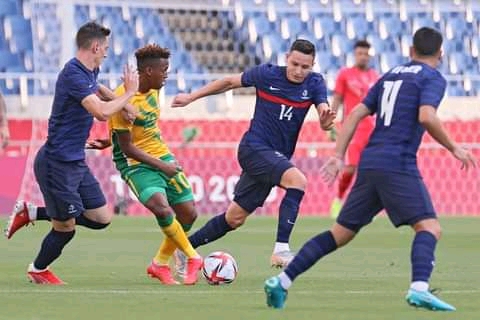 The South African Under-23s will start packing their belongings even before they play their last match on Wednesday so that they could be ready to catch the next flight home from the Tokyo Olympics in Japan.
This comes after coach David Notoane’s boys led three times only to lose 4-3 to France at the Saitama Stadium in Japan on Sunday morning.
This is the second match that the South African side lost having been beaten 1-0 by hosts Japan on Thursday.
There was no score at half time after South Africa’s Luther Singh missed a penalty in the 15th minute.
Actually, the South Africans had numerous opportunities in the first half, but their efforts were thwarted by French goalkeeper Paul Bernardoni.
However, things changed in the last 45 minutes with the second half producing seven goals. South Africa scored first through Kobamelo Kodisang, who capitalised from a confusion in the French defence.
Andre-Pierre Gignac made sure that the South Africans felt his presence on the field equalising in the 57th minute.
Evidence Makgopa restored South Africa’s lead in the 73rd minute only for Gignac to make it 2-2 for France.
Teboho Mokoena gave South Africa a 3-2 lead with a brilliant goal. But Gignac was not done yet as he completed his hattrick after he converted a penalty in the 86th minute. Match referee Kevin Ortega from Peru awarded the French a penalty after SA goalkeeper Ronwen Williams had fouled Arnaud Nordin.
The French’s winning goal came from Teji Savanier, who netted from the edge of the box in added time.