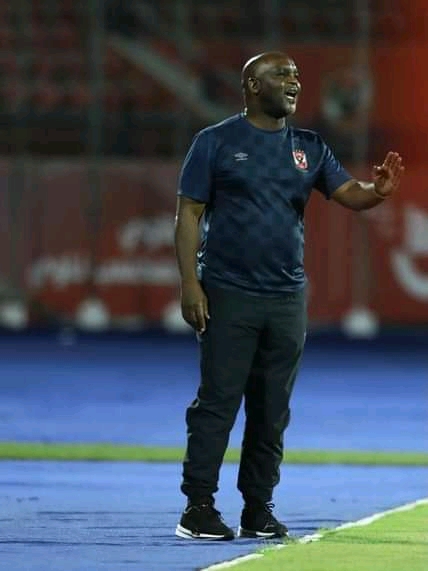 Things are coming together for Al Ahly coach Pitso Mosimane as the Red Devils have hit form at the right time.
And Mosimane has said that Al Ahly achieved their goal during an Egyptian Premier League match against Wadi Degla on Wednesday evening.
Mosimane led the Red Devils to yet another win as they beat Degla 2-1 at the Al-Salam Stadium in Cairo.
Mahmoud Kahrab and Mohamed Sherif scored for the CAF Champions League kings while Ahmed Sherif netted for Degla.
“We achieved what is required in Wadi Degla match. We topped the league table, which is the most important thing. The next period is difficult in our tournament,” the former Mamelodi Sundowns coach remarked.
As a result of the win, the Red Devils flew to the number one spot on the Egyptian Premier League standings sending Zamalek to second position.
Both Al Ahly and Zamalek have 61 points after winning, drawing and losing the same number of games. The Red Devils are on top because of a superior goal difference.
Mosimane, a three-time CAF Champions League winner, is now going to lead the Red Devils when they clash against 12th-placed Ceramica Cleopatra at 21h00 this coming Saturday.
Then they will meet Ismaily, who are 11th on the log, at 21h00 on Wednesday next week.
Meanwhile, Zamalek’s next two matches are against Ghazi EL Mahalla, who are 13th on the standings, on Saturday (19h00) and fifth-placed Al Ittihad on Tuesday (21h00).