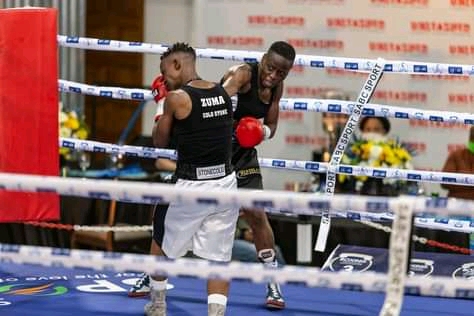 Clearly, Simangele Hadebe and Thema Zuma cannot get enough of each other thanks to the serious lack of opponents in the female flyweight division.
Hadebe and Zuma, who clashed in Johannesburg last month, will fight against each other yet again when they square up in a vacant South African female flyweight title contest in Pretoria on Saturday, 18 September.
The title became vacant after it was relinquished by Noxolo Makhanavu last month.
Already, the two lasses have fought twice with Hadebe emerging victorious in both bouts.
“To be honest, this time around it’s better because we are fighting for the SA title,” Hadebe said.
“However, it’s not nice fighting against the same opponent now and again. But circumstances have changed now because I will be fighting for the title something that l have always wanted to do. Winning an SA title will take my career forward.”
Given a choice, Hadebe wouldn’t face Zuma again. However, she has no choice because of lack of opponents in the flyweight division.
“Nothing challenges you when you fight the same person repeatedly,” Hadebe said.
“She didn’t trouble me when we fought last month. This time l’m planning to put her under pressure like l did when l stopped her in the fourth round in our first fight.”