BAD BOY OF SA BOXING BACK 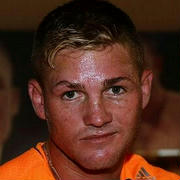 Thomas ‘Tommy Gun’ Oosthuizen, the bad boy of South African boxing, has been given an opportunity to start on a clean slate.
The 33-year-old former world champion gets a chance to box again as he faces Youssouf Kasongo Mwanza in Pretoria on Saturday, 18 September.
The fight against the boxer from the Democratic Republic of Congo offers Oosthuizen a perfect opportunity to show boxing lovers that he still has it inside the ring.
“I think it’s well overdue to get into the ring. We are ready to rock and roll. I’m so looking forward to it,” Oosthuizen said during an interview with SAfm’s Sport On show on Wednesday evening.
Oosthuizen, who spent 10 months behind bars last year, has not fought in more than two years. And he said that spending time in jail was a difficult road for him.
“It wasn’t the easiest road. It’s been a tough, tough road. Everything hasn’t been sunshine and moonlight. I’m just a man. I’m somebody who makes mistakes,” the former International Boxing Organisation (IBO) super-middleweight and light-heavyweight champion said on SAfm.
“I got into wrong situations. Things happened, I got into fighting some guy in public. Some guy got knocked out and you know when grown men look for trouble, they are big guys, but when they get whipped, they quickly run to courts. They were big mouths looking for trouble, they were big men looking for trouble.”
Meanwhile, Oosthuizen has not fought since he lost to Russian Aleksei Egorov in Russia in March 2019.