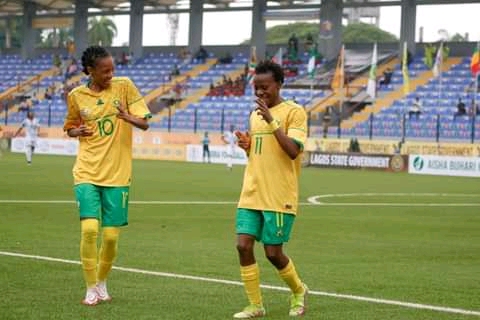 Desiree Ellis is happy after Banyana Banyana thrashed Ghana’s Black Queens 3-0 in their opening match at the Aisha Buhari Cup in Lagos, Nigeria.
Banyana Banyana’s goals were scored by Hilda Magaia, Thembi Kgatlana and Sibulele Holweni in the match, which was played at the Mobolaji Johnson Stadium on Friday evening.
“I felt in the beginning we got a little bit rusty. We hadn’t played since April,” the Banyana Banyana coach said.
“Some of our players we hadn’t seen since 2019. But the other group has been in training.”
Banyana Banyana created a number of chances during the match and Ellis is satisfied with their efforts.
“We created a lot of opportunities. If we don’t concede, obviously we have a chance of winning the game,” she said.
“As the game got on we got better until the later stages of the game. We managed the game really, really well. We knew there’s another game coming. We made a few changes. Our team is very versatile, when we made the changes, we looked even better. We are very happy that we could play, get the game behind us after having one session with the players.”