AMAZULU’S SEARCH FOR A WIN CONTINUES 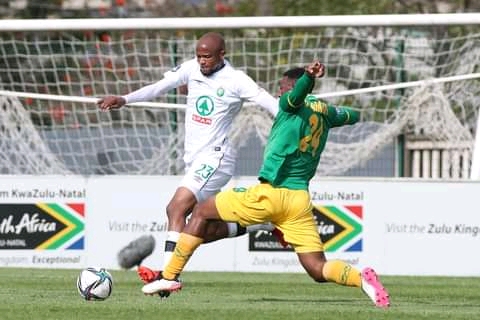 Searching for their first goal and first win of the season, AmaZulu held Lamontville Golden Arrows to a 2-2 draw in a DStv Premiership match played at the Sugar Ray Xulu Stadium in Clermont, Durban, on Wednesday afternoon.

Usuthu were the first to score through Mlambo, who netted following Siphesihle Maduna’s corner kick in the 24th minute.

The goal worked as a wake up call to Abafana Bes’thende as they pressed forward in search of an equaliser. They finally scored when Mutizwa converted a penalty in the 30th minute. Abafana Bes’thende got the penalty after Tsepo Masilela had handled inside the box.

Referee Victor Gomes gave Abafana Bes’thende their second penalty of the match, which was missed by Mutizwa in the 41st minute. This was after Luvuyo Memela’s late challenge on Nkosinathi Sibisi. Mutizwa hit the upright with Usuthu goalkeeper Veli Mothwa well beaten.

The tempo of the match changed as bit in the second half as there was little intensity.

Arrows took the lead after Mathiane headed in Thubelihle Magubane’s corner in the 77th minute.

But it didn’t take long for Usuthu to equalise as they pulled one back through Ntuli in the 79th minute. Ntuli converted a penalty after Sibisi had fouled Maduna.