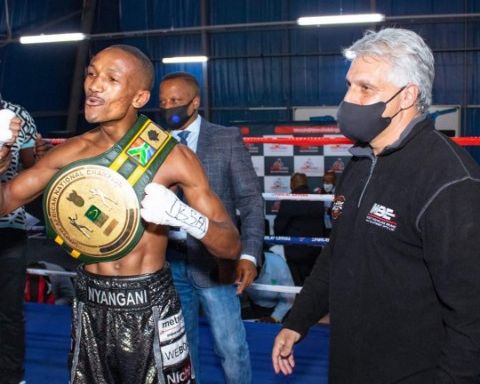 South African champion Bangile Nyangani has a dream and he wants to fulfil it, starting by successfully defending his national title.

Nyangani from Bityi in Mthatha is scheduled to make the first defence of his SA minimumweight title against Gqeberha’s Thembani Okolo in Johannesburg on Thursday, 27 January. The fight between the two Eastern Cape boxers is going to be shown on ESPN Africa.

“I really don’t know much about Okolo except that he has been around. One thing I know is that I’m going to make him my punching bag,” a confident Nyangani said.

This fight was due to have taken place in Gqeberha last month, but the date and venue were changed after ESPN got into the picture.

“I will be defending my title while he will be trying not to lose by a knockout. We were scheduled to fight in December and I was prepared to go beat him in his backyard in Gqeberha,” Nyangani remarked.

The 27-year-old Nyangani, who is trained by Alan Toweel in Johannesburg, is aiming higher in his boxing career.

“I want to go far in boxing. Firstly, I have to defend my title then look at the WBO and WBA where I’m rated,” Nyangani, who won the SA title when he outpointed Siyakholwa Kuse in East London last July, said.