JUNCO HAD A NICE TIME DESPITE HIS BOXER’S LOSS 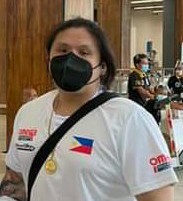 Julius Erving Junco, who trains Christian ‘The Bomb’ Araneta, enjoyed the time he spent in South Africa despite his boxer losing to Sivenathi ‘Special One’ Nontshinga on Saturday.

Nontshinga outpointed Araneta during an International Boxing Federation (IBF) junior-flyweight eliminator at the Boardwalk Hotel and Casino in Gqeberha.
“It’s always a good time in South Africa. I love the people and the weather. It’s my second time to be in South Africa. The first was in East London,” Junco said.

Junco, who is the chief trainer at Omega Boxing Gym in Cebu City in the Philippines, has said that he’s impressed with South African boxers even though he believes that they still need to do more.
“South African boxers are good, but they need to step on the gas if they want to compete in the US or outside Africa. I mean they need to be more aggressive, more entertaining to sell their fights,” he said.

Despite insisting that South African boxers need to to do more, Junco still believes that there is nothing wrong with how SA fighters are trained.

“I think the training is not a problem. It’s the attitude towards the fight. I’m no expert, I’m learning everyday,” Junco said.