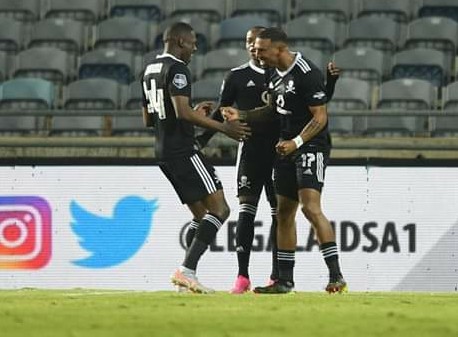 Orlando Pirates compounded relegation-haunted Black Leopards’ problems when they beat them 3-0 in a DStv Premiership fixture at the Orlando Stadium in Soweto on Thursday evening.
A Tshegofatso Mabasa brace and a goal from Gabadinho Mhango were enough to give the Buccaneers the three points. All the goals were scored in the second half.
Mabasa netted his first goal in the 47th minute off a cross from Wayne Jooste. Mabasa completed his brace in the 67th minute and Mhango made it 3-0 in the 86th minute.
The Buccaneers moved one place to fourth on the Premiership table with 42 points after winning 11 matches, drawing nine and losing five. Lidoda Duvha, who are 16th on the log, have won four games, drawn six and lost 16.
Up next for Pirates is a clash against Stellenbosch FC while Leopards will face Chippa United in a six-pointer.