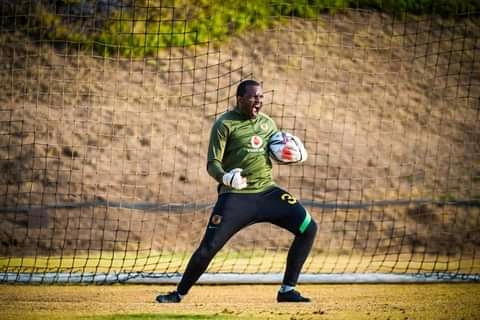 Veteran goalkeeper Itumeleng Khune is going to be Kaizer Chiefs captain this coming season.
This was revealed by Amakhosi coach Stuart Baxter during an interview on SAfm’s Sport On show on Thursday evening.
“The club captain will be Itumeleng Khune. We have decided on that. He will wear the armband whenever he is playing and off the field. But as far as the team captain is concerned, we have a number of leaders and we will see who leads on Sunday,” Baxter told SAfm.
This is not the first time that the 34-year-old Khune captains the Soweto giants. He’s done that many times in the past.
Meanwhile, Chiefs face Mamelodi Sundowns in an MTN8 quarter-final encounter at the Lucas Moripe Stadium in Atteridgeville on Sunday afternoon (15h00).
“Sundowns have set the benchmark. They rule the roost right now. The gap is huge, but we need to make sure that we are part of the chasing pack and we have to start by showing them on Sunday in the MTN8,” Baxter said.
After facing Sundowns, Chiefs will then open their DStv Premiership campaign with a clash against TS Galaxy at the Mbombela Stadium in Nelspruit on Sunday, 22 August at 17h00.