TAU READY TO POUNCE ON ZIMBABWE 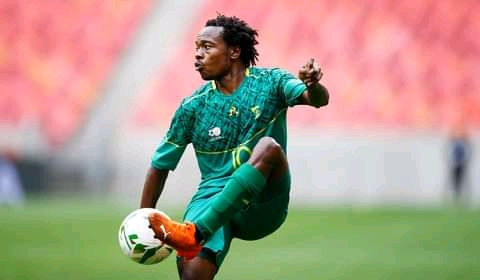 Bafana Bafana vice-captain Percy Tau cannot wait to get on to the field and face Zimbabwe in a 2022 FIFA World Cup qualifier at the FNB Stadium in Nasrec, Johannesburg, at 21h00 on Thursday.

After missing Bafana Bafana’s back-to-back matches against Ethiopia last month, Tau is expected to play a major role in the South African senior men’s national team’s push for a place in the final round of qualifiers.

“We are looking forward to the game against Zimbabwe. We know it’s not gonna be easy,” the Al Ahly star said.

“The group has done well over the four games. We just want to get better and do better this time around. I’m confident in the group.”

The 27-year-old Tau came into the Bafana Bafana camp having had a brilliant start at the Egyptian giants. He scored a brace on debut during the Red Devils’ 4-0 win over Ismaily in the opening match of the season.

“It’s always good to score on your debut. I think it takes away the pressure and it’s something that I have always done in my career. In Belgium every time I scored on debut. It’s just it didn’t happen in England. I’m confident with myself, I feel different now,” he said.

On missing Bafana Bafana’s last two matches against Ethiopia, Tau said: “It was a situation where everyone had to understand. I was not fit, I was injured and I could not be selfish. I always had the belief that my teammates would do the job.”