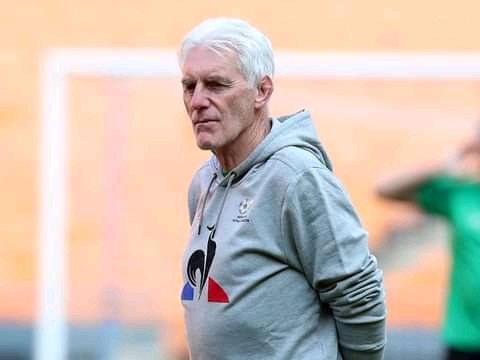 Bafana Bafana coach Hugo Broos knows what is expected when his boys meet Ghana in a crucial 2022 FIFA World Cup qualifier away in Cape Coast on Sunday evening (21h00).

Bafana Bafana, who have 13 points from four wins and a draw, need a win or a stalemate to advance to the final round of qualifiers. The Black Stars have 10 points after winning three times, drawing once and losing once.

“We know it will be a tough game. I did my homework. We know we are going to play against a strong team. The experience they have in that team, we don’t have that in our team,” Broos said.

The 69-year-old Belgian, who was appointed in May and officially started working with Bafana Bafana in July, has admitted that his boys have so far exceeded expectations.

“It’s a new team, it’s a young team. It’s a team full of ambitions. Before we played the qualifiers, nobody knew that before the last match South Africa will be three points ahead of Ghana,” Broos said.

“The pressure is not on us. If we don’t qualify it will be a disappointment, surely. But more than that, we did a very good race. We lost only two points, that was our first game in Zimbabwe.”